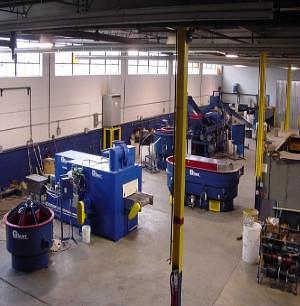 Giant Finishing is a family owned business that was started in the late 80’s.

Miro Oryszczak had “The American Dream” he came to America from Europe in 1966. Miro worked to put himself through school at the University of Illinois where he received his diploma in Mechanical Analysis and Design. Soon after graduating Miro started working in the industry of deburring and finishing equipment. After 15 years of working in the industry, Miro decided to open his own company where he designed and manufactured his own line of vibratory finishing equipment. In turn he opened up Giant Finishing Inc. While working three other jobs Mark Oryszczak, Miro’s son joined the business in 1996 and took on the sales and marketing aspect of the company. Even when the economy took a hit in 2008-2009, Giant Finishing felt the effects of business slowing down. But with the dedication that Miro and Mark have put into Giant Finishing they are now one of the top leaders in the deburring and finishing industry. Miro is still hands on leading his engineering team, overseeing each project to make sure the customer’s needs are met. Giant Finishing has become the top leader for the Performance Racing, firearms, ammunition, powdered metal, and aerospace industries. Giant Finishing takes pride in giving priority to their customers and looking after their needs. Quality and customer service is what distinguishes Giant Finishing from others. Giant Finishing always strives to exceed our customers’ expectations and meet their requirements. We here at Giant Finishing want to make shopping for the perfect vibratory machine easy and without all the hassle. This is why Giant Finishing is your one stop shop for, vibratory machines, media, compound, parts process development.

With business booming now, Giant Finishing is coming out stronger than ever before. We have expanded our market worldwide mainly concentrating on North America, Central America, and South America. Giant Finishing provides a full line of vibratory finishing bowls, vibratory deburring tubs, finishing ovals, continuous flow deburring and finishing equipment or systems, vibratory corn cob dryers, inline aqueous washers and heated dryers with material handling systems, and our latest offering of our high energy deburring and finishing centrifugal barrel tumblers. No matter what your finishing problem we have a finishing solution. 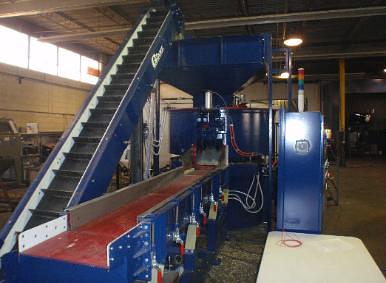 At Giant Finishing customizing our vibratory deburring and finishing equipment is our specialty. We can help you load the parts with one of our parts load conveyors, vibratory feeders, hydraulic dumpers or parts loaders.

A complete assortment of equipment to assist with the loading, unloading and transferring from heavy industrial vibratory finishing, tumbling, deburring equipment transferable without any need for interaction, over onto the next series or line in your production facility, anywhere, to your operators unloading table, we are here to help you from the very beginning to the very end. Giant Finishing has a pledge to deliver the whole package that will fit your requirements and build machinery that works just as hard as it does the first run for a very long time. We have the capability to build any style system that meets your business output needs. Vibratory deburring machines aren’t the only thing we can supply you with, there is much more.

Our vibratory deburring equipment, finishing media & chemical compounds combined with the right chemistry, with the right machine, liquid and materials used in the deburring process specific to your applications.

Remember, explore what Giant Finishing has to offer you first, be sure to ask questions about the different applications and we have over 35 years of experience in this business.