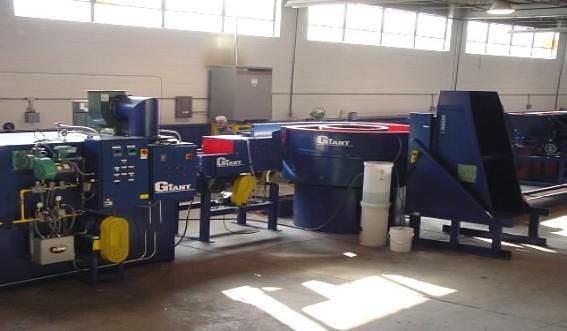 Transition of parts from start to finish.

Parts that are very delicate or can not tolerate any scratches or nicks can be collected on a table and picked-up by the operator for the next process.

A conveyor will bring the parts up to the table and then assorted manually by a Quality Assurance employee.

For minimal part on part damage while parts are discharged from vibratory finishing machines or other mass finishing equipment.

This equipment is equipped with sensors to dictate the amount of parts inside the container, as the container is filled sensors will detect this and adjust the height and level of the container to adjacent levels until its full.

Gives the operator the ability to load parts into machine without using loading platforms or catwalks. The parts load conveyor will also eliminate any ergonomic safety issues.

The load conveyor can lift and load any parts up to any machine height needed to properly handle all materials or parts for the next finishing process.

Used to separate heavy solids from vibratory waste water prior to going to drain.

This simple yet heavy duty steel settling tank is equipped with drainage ports for threaded and or custom connectors.

Used to get 100% coverage of parts in a dip process the parts are submerged in a rust preventative solution, then dragged out by a cleated conveyor. Popular options include variable speed, heated tank, and blow off.

Used to remove and/or store media from one machine location to the next with this storage on casters solution.

Easy to change over media for one job onto the next, keeps vibratory finishing easy and organized.

Used to help manually sort parts from media by creating a custom sized urethane screen to separate media from parts.

Collecting the media is not a hassle and can be fed back into your machine.

Vibrating orientation bowl used to orientate parts the same way each and every time. Works well with robotic cells.

If your shipping equipment or next process requires the part to be standing vertical or horizontal, we can custom make a table to do this for the part.

Gives the operator the capability to load parts into machine a tote at a time.

This heavy duty dumper can take a large weight of parts and load them into any bowl type vibratory finishing machine or other mass finishing equipment.

After any deburring or metal finishing is done in a vibratory finishing machine, it may need extra time to remove media from inside the part, this screen allots for more time to vibrate the part to remove any media inside.

Vibratory hopper used to meter parts into a any deburring equipment at a consistent flow.